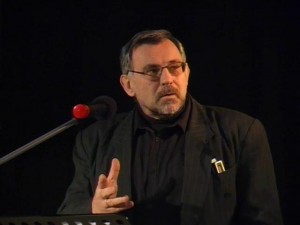 Prof. ThDr. Pavel Hanes, PhD. is a professor at the Department of Theology and Catechetics (previously the Department of Evangelical Theology and Missions) at the Faculty of Education of the University of Matej Bel in Banska Bystrica, Slovakia. He has been working there since the foundation of the department in 1993. Before coming to teach at the department, he pastored a Baptist church in Slovakia for over 10 years. He got his degree in Theology at the Lutheran Theological Faculty, Comenius University, in Bratislava in 1982. He gained his PhD. from the same Faculty in 2002 and the topic of his thesis was “The Relationship of Soteriology and Social Issues in Theology of Revivalism.” In 2002-2003 he was an active member of a translating group of the Slovak Bible Society which worked on an ecumenical Bible translation. Pavel Hanes was in charge of the translation of the Book of Job. At present he is involved in the team work producing cross-references for the new ecumenical Bible translation. In 2009 he published a study “The Theology of Catastrophe according to the Book of Job”. In the same year he became an associate professor at the Lutheran Theological Faculty in Bratislava. Currently Pavel Hanes is a guarantor of philosophy for theologians, as well as of apologetics and of the Old Testament subjects taught and studied at the Department of Theology and Catechetics. He is a tutor and an opponent of final theses for all the college degrees. In 2011 he was a member of the habilitation committee at the Department of Science at the Hussite Faculty of Theology, Charles University, in Prague. Besides preaching and lecturing in Slovakia, he also preaches and teaches at theological institutions and churches abroad. This includes lecturing at the East-West Center for Missions, Seoul, South Korea, August 1993; speaking during a lecture tour at various theological institutions and churches in USA (February 2003); giving lectures to the theology (Religionspädagogik) students at Dortmund Universität in Germany (2010); and teaching at the International Baptist Theological Seminary in Prague, Czech Republic on the topic of Poverty in the Old Testament (November 2011). Regarding research, Pavel Hanes has been a member of several teams of researchers for a number of years. These teams have been involved in nationally and internationally acknowledged projects (e.g. the institutional grant research within ZEC 2006/KETM-1: „Dynamizing Evangelical Witness in Post-Communist Era: Increasing Effectiveness of the Evangelical Churches in the Slovak Republic by Making the Best of Critical Theology“). Between 2008 and 2009 he was invited to be a part of the research via the “Text and Canon” project at Tyndale House in Cambridge, Great Britain. In 2010 he took an active role in the “Theological and Catechetical Basics of the Educational Paradigm” project at Wheaton College in Wheaton, Illinois. Between 2007 and 2008 he was a consultant of the VEGA project 1/007/08: “Homiletics of the Slovak Churches and its Impact on the Quality of Life in a Pluralistic Society.”